I’m not really a railway enthusiast – at least that’s what I keep telling myself. But since leaving England almost 5 years ago, I have missed its heritage railways, and have struggled to find any here in Germany that compare with what England has to offer. But thanks to my wife, we eventually found one tucked away in the middle of the Harz mountains in northern Germany, and it was well worth the wait… 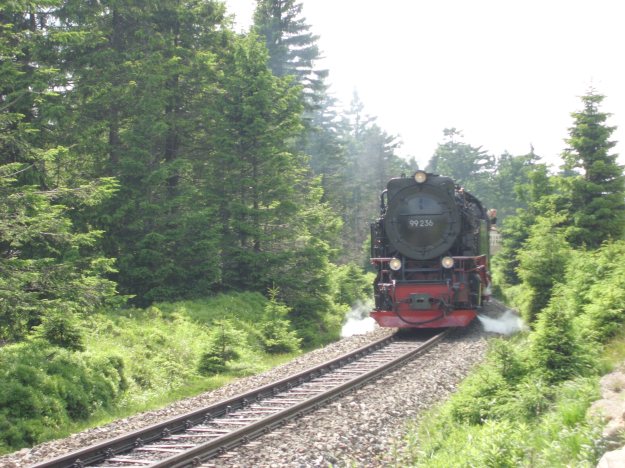 We set off from Bonn on Friday afternoon and arrived at our hotel in Wernigerode in the early evening. According to the HSB train timetable, this small town sits at an altitude of 234 metres and will be the starting point for our journey to the top of the Brocken mountain the next day. Wernigerode is in the former East Germany (GDR), but the border with West Germany ran through this region and this had an impact on the railway. I read several web sites such as the Geothe institute and discovered the Brocken mountain was a military exclusion zone within the GDR with a wall around the top to stop people visiting. This meant passenger trains did not run up there between 1961 and 1992. I felt privileged to have the freedom to enjoy this railway without any restrictions.

HSB took over ownership of the railway in 1993 and claims it is one of the biggest employers in the area attracting over one million visitors a year! These figures are very impressive, but its 87 miles of track, 48 stations, 25 steam engines and all year round service means it’s not as overcrowded as you might expect, at least it wasn’t when I was there. Having said that, us Brits might benefit from being slightly more assertive when queuing for the train back from the top, especially if it is the last train of the day! 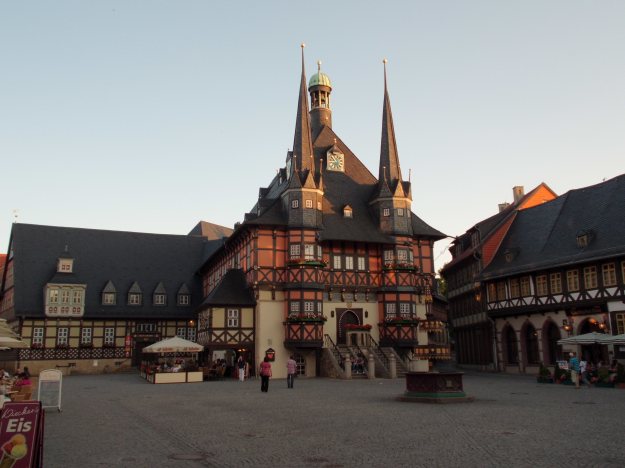 Wernigerode is a delightful little town with very clean streets, beautiful buildings and overlooked by an impressive castle. The station is a nice addition to town’s attractions and as we arrived a little early, I had time to see the steam locomotives being preparing for the challenging journey ahead. 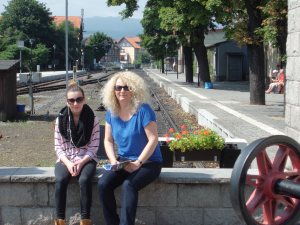 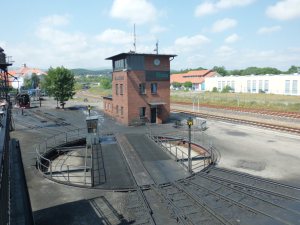 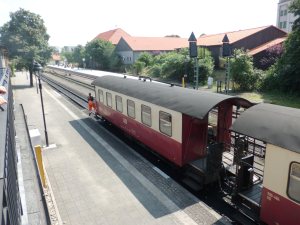 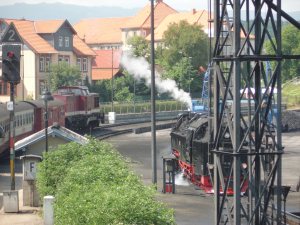 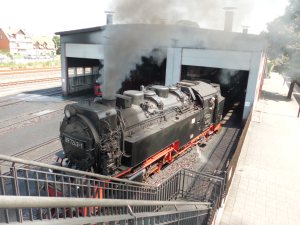 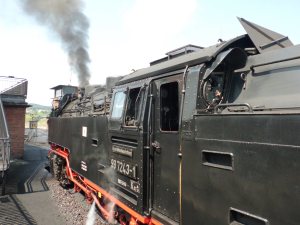 The first part of the journey was rather sedate with the engine gently climbing through towns and villages, alongside cycle paths, footpaths and running so close to houses that I felt like I was getting a tiny glimpse into the lives of the people who live in this wonderful region. 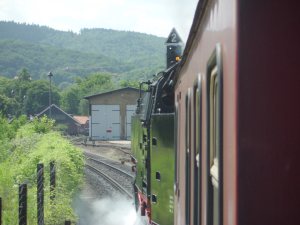 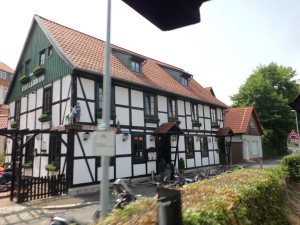 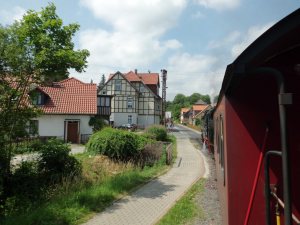 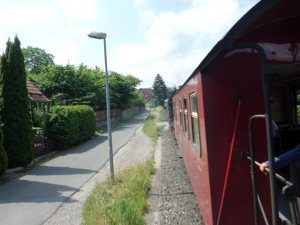 After about 40 minutes, we reached the station Drei Annen Hohne which is 540 metres above sea level. Here we changed trains and began the more spectacular journey to Brocken. The landscape became more dramatic and the two steam engines made a real noise as they powered their way up another 585 metres to the summit at 1125 metres. This is not a funicular railway or a cog railway. There are no cables, pulleys, cogs, toothed rack-rails or whatever else is sometimes used to help trains when making steep mountain climbs. This is just an ordinary railway – perhaps a little smaller than the standard gauge, but essentially it is still an ordinary railway making an extraordinary journey.

The summit was quite nice, but not great – to begin with at least. The clouds had rolled in, it was fairly crowded and the buildings weren’t that attractive. I wondered whether they might have been left there by the Soviets after being used to spy on the west. Perhaps I’d been watching too many Cold War thrillers. I read a telegraph article to check my facts. I couldn’t find anything about the buildings, but it did help me to understand the importance of the Brocken at this time. With a nuclear superpower on each side, the Iron Curtain did not just divide Germany, it divided the world, and this mountain appears to have been one of the most important sites along that divide. We didn’t stay up there for long – just long enough to get a meal that reminded me of school dinners after which the clouds cleared to reveal breathtaking views of a vast landscape. Inspired by the panorama, we decided to go for a little walk. 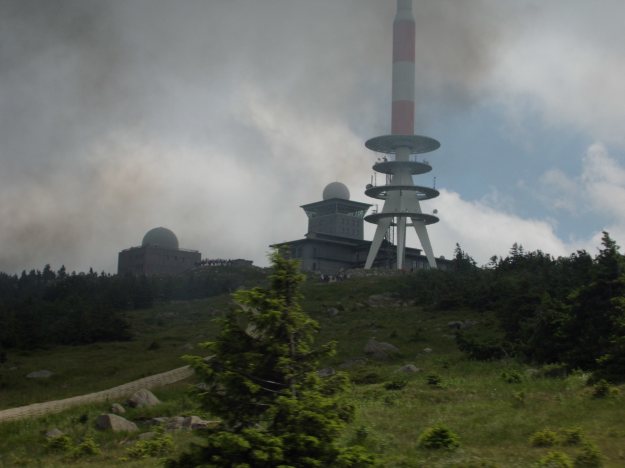 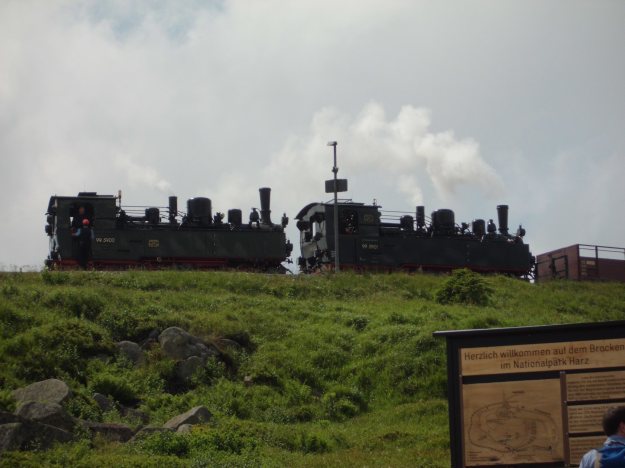 Okay, it was a bit more than a little walk, and after 3 hours, we were still trying to reach the station at Schierke. A wrong turn had taken us through an interesting trail that included streams, sculptures and gruelling downhill slopes. The footpaths were really well-kept, well sign-posted and there were plenty of places to get a good view of the trains. The wrong turn was entirely our fault, perhaps I was too much in awe of the surroundings to concentrate on navigating. I don’t normally like to drink alcohol in the daytime, but at Schierke station, I made an exception. It was the most appreciated cold beer I’ve ever tasted! We then caught the next train which rolled effortlessly back into Wernigerode. 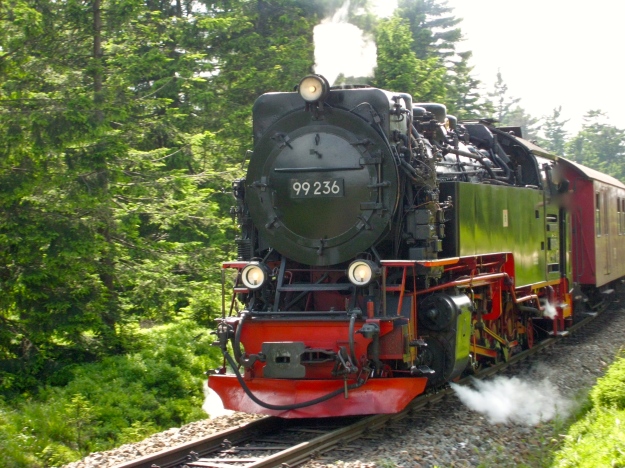 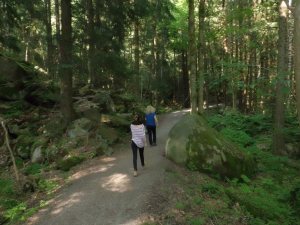 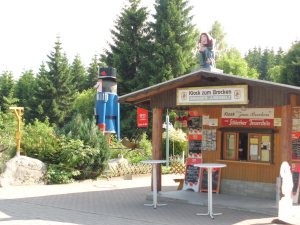 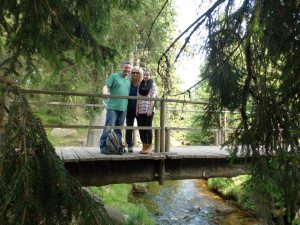 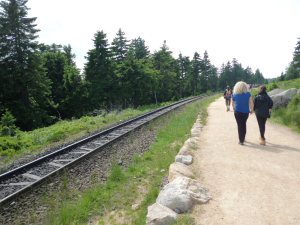 As I sit here on the 25th January 2014 writing this post, I take a look at the webcam for Brocken and notice it is covered with snow. My weather report tells me it is -11 down at Wernigerode, so obviously even colder up on the mountain. I feel tempted to just drive off there to take some photos – it must be a spectacular sight on a sunny day when the snow is deep and the engines are working their way up the steep inclines. Maybe I will get a chance to update this post with some new photos soon, but 5 hours is a long way to drive for a photo, isn’t it? 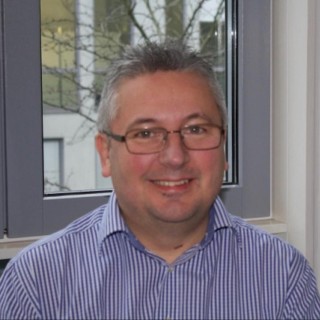